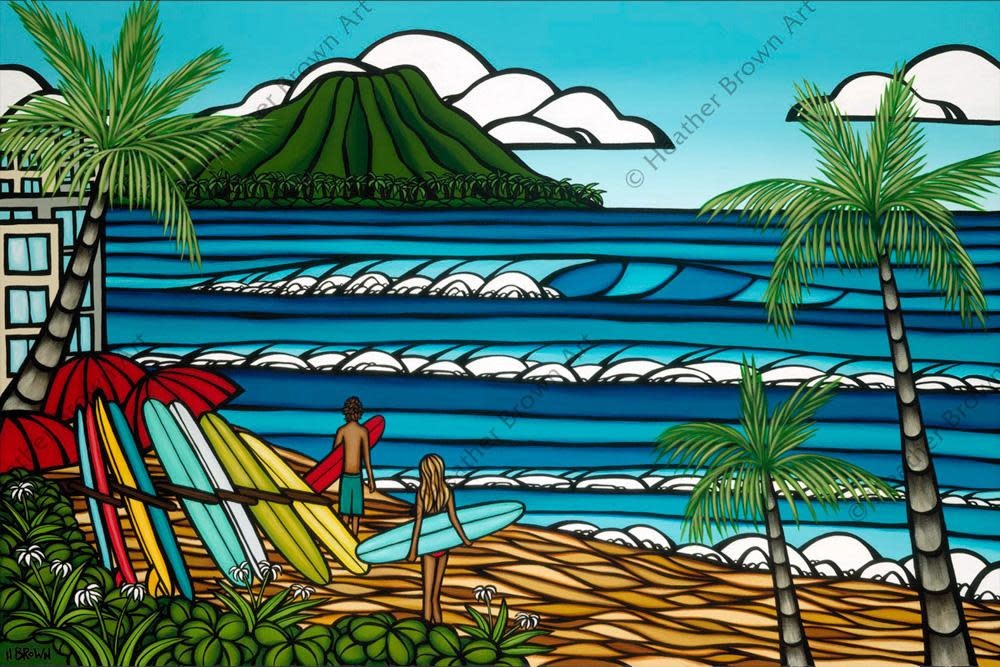 Heather Brown grew up in a family of artists in Southern California and found her passions in both art and nature at an early age. Later, she worked as a boat captain and dive master to put herself through the Bachelors of Fine Arts program at the University of Hawaii, which gave her the perfect vantage point to fill her head with the beautiful imagery of the Hawaiian Islands. She honed her artistic skills in college focusing primarily on the "lost arts" of intaglio printmaking, silkscreen printing, linocuts, woodcuts, and etchings which explains where her iconic style was born and bred. She has made it her life's work to capture the true essence of the most beautiful beaches, surf breaks, and locales in Hawaii and around the world. She has been coined the "Godmother of Modern Surf Art" by the Los Angeles Times. Her art has become a benchmark in the global surf art market, finding its way into collector’s homes around the world. She’s been named "Best Artist In Hawaii" for 4 consecutive years, and chosen as Rip Curl’s "Artist of the Search" for the past 5 years now garnering her own clothing line "Heather Brown for Rip Curl." She has created art for The Vans Triple Crown of Surfing, Jack Johnson’s Kōkua Festival, The Surfrider Foundation and many more as well as opening up Heather Brown Galleries in Tokyo, and Osaka Japan. She continues to work with numerous non-profits around the world, always keeping "giving back" extremely close to her heart.